Booknordics' Introduction to the Northern Lights

You may have heard the romance and emotion surrounding the most extraordinary light show seen from Earth and now more than ever before, people are inclined to chase front row tickets. The Northern Lights are the talk of the town and a natural phenomenon not to be missed.

This electrifying, vivid auroral display is extraordinary, leaving a trail of colourful wanderlust following anyone who witnesses. Here at Booknordics.com, we would like to share with you the famous myths and legends surrounding the magical lights, the interesting science behind them and why the Northern Lights hold a special place in our company's heart.

Booknordics.com Welcomes You to the Northern Skies 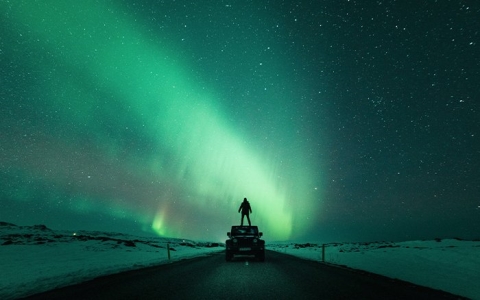 Our goal is to welcome you to the incredible north, to our Nordic land where otherworldly opportunities are limitless, an overwhelming sense of inspiring awe is guaranteed and witnessing ultimate phenomena in all directions is possible.

The Northern Lights not only cast a protective sheet over our dominantly spectacular lands but also over us.

We are proud of the Nordics, the diverse contrasts of the land beneath our feet; the folklore, myths, mysteries and celebrations of the ancient past that shape our heritage and culture; and the science that creates what seems impossible and unreachable, dance above our heads.

We wish to share this all with you and the Northern Lights make that possible.

The Science Behind the Geomagnetic North Pole 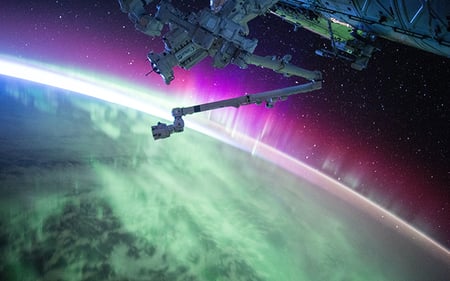 Northern Lights are visible from space

Present science will tell you that the Aurora Borealis is a rich, authentic demonstration of the Earth's magnetic field interacting with charged particles from the sun.

Let’s get a little more technical shall we?

Due to the sun rotating on its axis, its magnetic field is consistently twisting. When there is a disturbance in the sun's magnetic field, it bursts through the surface of the sun and creates temporary patches called sunspots, otherwise known as ‘active regions’.

All this and the rise and fall of its extreme temperature, causes those sunspots to erupt into electric ‘solar winds’ that direct charged particles into space. The Earth’s magnetic field resists around 98% of these particles, meanwhile the remaining flow through and travel towards our north and south poles.

These particles pass through the different atmosphere levels surrounding the Earth's orbit and interact with the gases circling inside, finally appearing as a sequence of multi-coloured lights. As a result, two glorious glowing rings of auroral emissions are created directly around our north and south pole, identified as the auroral oval.

What can be seen from Earth is a masterpiece of colour changes, seen throughout a vivid green, pink, white or even blue parade. You may even be so lucky seeing them take the form of archways, leading the way out of the Earth's atmosphere.

Booknordics.com, as locals ourselves, invite you to befriend an open lit campfire in the wilderness and indulge in deliciously roasted hotdogs and tasty warm blueberry tea. We are almost certain that on your Northern Lights adventure, the Nordic locals will be thrilled to inform you of the legendary fantasy stories surrounding the dazzling auroral light - making you an expert in seconds.

Aurora Zone for you to Enjoy 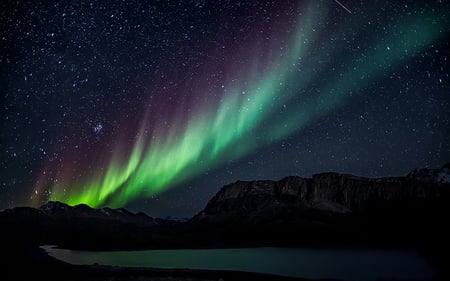 Strong colours light up the Nordic skies from time to time

For centuries the Northern Lights have been the birth and foundation of mythical stories, folklore, local legends and the topic of research. As the closest revelation to space phenomena, they have been an influence on worldwide conversation, history, culture, art and religion.

Featured a great deal in fairy tales and Norse mythology, the Northern Lights were to reflect many different beliefs. Some said they were armour used during the great wars, a form of wildlife encounters or having supernatural powers.

For us, it shows that the Nordics is a phenomenal place where magic can happen. Inspiration not only surrounds us within our direct settings but in those that we cannot physically reach. For us - it’s what makes the Nordics different, and it's good to be different.

So, what is the story today?

The Story of the Northern Lights 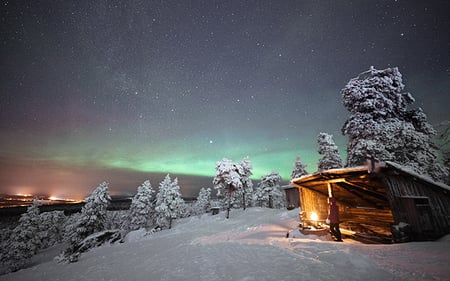 Do you know the scientific name of Aurora Borealis?

Did you know that uncertain indication of the Northern Lights existence date back as early as 2000BC?

It wasn’t until 1619, that Galileo, using both Latin and Greek terminology, gave the magnificent swirls of colour their scientific name, ‘Aurora Borealis’ - meaning - ‘Dawn of the North’.

There were many other suspected indications as to what meaning the swirling lights brought to those on Earth. Let us appreciate what our ancient ancestors believed as they witnessed the skies ablaze with light: 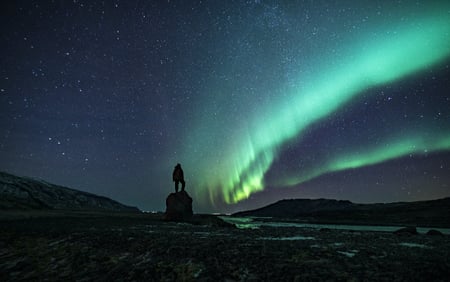 Be part of the mystical Norse legends

Before science explained how Lady Aurora ruled the sky, the Northern Lights were assigned great mystical power and significance across the Nordic regions. Worship, ancient beliefs and rituals were formed, known to us today as Norse Mythology.

Did you know that ‘Aurora’ is derived from the name of the Roman goddess of the dawn, who travelled from east to west announcing the arrival of the sun on her rainbow-coloured chariot?

As Norse legend suggests, The Vikings believed the lights represented reflections from the shields and armour of the Valkyrie - the choosers of the fallen during the war. The Aurora was also believed to be ‘Bifrost Bridge’ - a glowing arch that led those fallen in battle to the warriors final resting place at Valhalla.

It was a tremendous honour to be chosen by the sacred Valkyries to become warriors in Odin's personal army. The presence of the Northern Lights, entwined with this belief, was a cause for celebration.

The Sami, Norway's indigenous people, were not so overjoyed to witness the arrival of the auroral storms. They believed the lights obtained representations of the dead and the souls of the dead were not to be disturbed.

The Sami people avoided looking, talking, waving, whistling or singing under the Northern Lights, as they believed if the lights were to suspect your presence, you would be snatched away into the night.

What do you believe?

The Colours of Lady Aurora 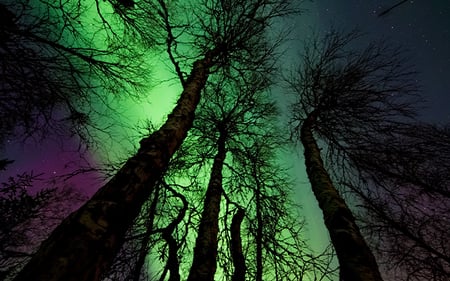 Vivid and rare colours transparent for the human eye

The vivid auroral displays have stunned humanity for years, showing promise of their existence in a celestial veil of changing colours, entwining with the stars to waltz across the sky.

The Earth’s atmosphere is devised from different atoms, at different altitudes and with different concentration levels. When the charged particles from the sun collide with these atoms, it ‘excites’ them, producing a variety of colours that Galileo named the Northern Lights.

The colours associated with Aurora Borealis are pink, red, green, yellow, blue, violet and white. Although the human eye detects the colour green more than any other colour - hence why we see more green light during the celestial display - it doesn't mean that others were not present during an Auroral storm.

Did you know that there are auroral emissions on Mars, Jupiter, Saturn and we believe - Uranus and Neptune as well?

Let us help you take a deeper look into the colours of the Northern Lights:

Do not be surprised if your camera detects a hint of colour that you did not see with your naked eye. For this reason, we recommend you have the correct camera settings and adjust accordingly. Read our excellent Northern Lights photo guide for more information. 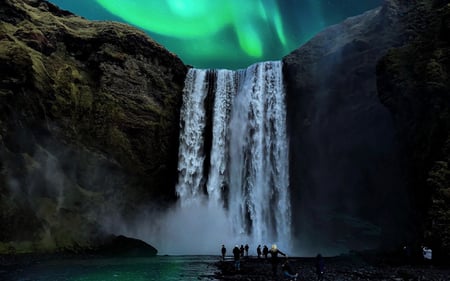 The Northern Lights represent an other-worldly phenomenon that is on the very tip of many traveller's tongues. Adventurers from far and wide gather in the Nordic regions to experience the once-in-a-lifetime feeling of beholding the natural wonder in action.

Aurora Borealis significantly dominates the sky in the polar regions, within a radius of 2,500 km around the magnetic poles, known as the Auroral Zone or the Auroral Oval. Experience shows that she most frequently appears between 17:00 and 02:00 during the winter months of September through April.

When are the Auroras Most Active?

Befriend with the sky on a typical Nordic winter night

Planning your winter vacation is recommended as the Polar Light displays are understood to be somewhat unpredictable. The Northern Lights need a clear, dark and wide-open sky to present an exceptional mesmerizing show.

Leave the bright city lights behind and head out into the vast snow-covered landscapes where your canvassed sky is exposed and crystal clear. Be patient, prepared and wrap up warm, Lady Aurora will show when she's ready.

On the unfortunate nights when the clouds and the moon befriend the sky, the show may be slightly less visible but just as equally remarkable. That is why at Booknordics.com we offer authentic and unique Nordic Adventures to give you the best possible chances at seeing the Green Lady in all her glory.

Did you know it has been recorded that Aurora Borealis, as she shines bright enough, can be seen from as far as our very own solar system? Now, that may be a view to remember, but we promise that the Nordics are just as dazzling.

The Best Month to See the Northern Lights 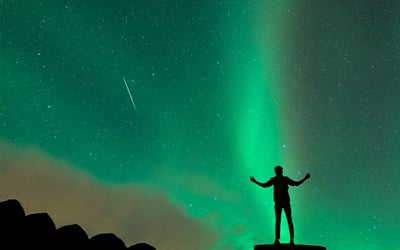 Join us on a Nordic Adventure!

Statistically speaking, the Northern Lights are most active in March and April; September and October. Especially during the Equinoxes in the last two weeks of September and the second and third week of March.

However, notably, the Northern Lights are predominantly visible in November, December, January and February too.

Did you know that through the summer months, as unnoticed as she may be, Lady Aurora is still scientifically present?

During the darker months of November, December and January and the arrival of the Polar Night, you will frequently witness a magical blue twilight and usually during this time you have an outstanding opportunity to join a perfectly-timed Nordic Adventure. Gifted with extra night-time hours and more opportunities to chase the Northern Lights, you may be joined by a few twinkling stars to enlighten your view.

Let us take a look at the Nordic countries to see when is best to visit.

Holidays to Witness the Northern Lights

The Northern Lights, being at the top of many bucket lists, leaves open opportunities of a lifetime and adventures ready to be taken.

At Booknordics.com, we offer superior and hand-selected tours to accommodate any travellers' Nordic holiday experience. Take your pick of outstanding Northern Light tours from Norway, Iceland, Sweden, Finland, the Faroe Island and Greenland. Yes! That is a lot of choices.

Whether you’re in search of a romantic and relaxing wilderness dream, an action-packed and frosty vehicle adventure, a slow and relaxing sail on the silent seas or a peaceful soak in the vast nature of the Nordics - we have an endless list to suit everyone.

We hope you find the right tour for your Nordic holiday. If you need further assistance, please contact us and we will do our very best to accommodate you and your loved ones.